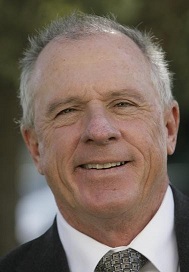 Supervisor Mick Gleason was elected to serve the 1st District of Kern County on November 8, 2012 and took office on January, 7, 2013.

A former Navy Captain and base commander, CAPT Michael (Mick) Gleason (USN, ret) has lived in Kern County’s 1st District since 2004 after being selected as Commanding Officer of China Lake NAWS. He is dedicated to agriculture, energy and military issues confronting the 1st District and has pledged to foster a job-creating economy in Kern County.

Supervisor Mick Gleason was born in Nyack, New York and moved to Haverhill, Massachusetts. He graduated from the University of Notre Dame in 1972 with a Bachelor’s Degree in Business Administration.

As a Captain in the US Navy, his final assignment was as the Commanding Officer of Naval Air Weapons Station China Lake in 2008. Mick and Robynn have three sons, Wes, Paddy, and Jeff. After retiring from active duty after 27 years, Mr. Gleason accepted a job as a senior program manager with General Dynamics and has also helped launch the China Lake Alliance, a community advocacy group, designed to support the US Navy at China Lake.

Supervisor Gleason graduated from the Naval Postgraduate School in Monterey, CA in 1999 where he earned his Master’s Degree in Astronautical Engineering. He loves spending time with his family and kids.

Free viewers are required for some of the attached documents.
They can be downloaded by clicking on the icons below.