The Kern County Heritage Commission is supported by the Board of Supervisors and the Veterans Service Department. The Commission's purpose is to promote patriotism through preservation of our heritage for the benefit of all citizens, as well as to maintain continuing programs for the educational institutions of Kern County. In so doing, we arrange for the ringing of Kern County's Liberty Bell on traditional and recognized patriotic holidays.

This full size replica of the Liberty Bell is located in front of the Superior Court Building at Truxtun and Chester Avenues in Bakersfield, the County Seat. 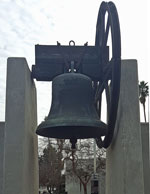 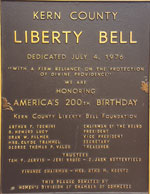 Be Proud of Your Heritage

As citizens of these 50 United States, we are above all, Americans. It is our ancestry that gives each of us a unique and distinctive presence characterizing what the word "American" represents. Our individual heritage must be remembered and passed on from generation to generation as a reminder of who we are and what we contributed to this magnificent nation.

"They Built a Home for the Soul of the Nation"

They came from faraway places and faraway times and merged their talents and customs into a new nationality and created an America which serves as a beacon of hope for the world.

They began in 1492 when under the leadership of an Italian explorer the men of Spain including one black man and six Jews arrived in the lands of the Indians. Then came English and Dutch, Scotch-Irish and Swedes, Germans and French and later all the different peoples of Europe, Africa and Asia. In partnership, they built a country strong in its richness of ethnic variety committed to the quest for freedom, compassion and respect for human differences.

"I have a dream that one day this nation will rise up and live out the true meaning of its creed - "We hold these truths to be self evident, that all men are created equal."

"This will be the day when all of God's children will be able to sing with a new meaning 'My country 'tis of thee, sweet land of liberty, of thee I sing. Land where my fathers died, land of the pilgrim's pride, from every mountainside, let freedom ring.'"

"Let freedom ring from the curvaceous peaks of California."

- Excerpts from Martin Luther King Jr's speech, "I Have a Dream."

In Bakersfield, ceremonies are usually held by the Liberty Bell replica in front of the Superior Court building (1415 Truxtun Avenue, Southeast corner) beginning at 11:00 a.m. Other communities within Kern County may also be holding similar ceremonies and announcements.

Some of these events are:

The Constitution of the United States of America is the safeguard of all our liberties and champion of our freedoms. In 1956 The National Society Daughters of the American Revolution (NSDAR) established the Patriotic Endeavor of designating September 17 through September 23 as Constitution Week. This was done to emphasize the responsibility of Americans to protect and defend the Constitution and to defend it for posterity. To underscore the understanding that the Constitution is our great heritage and the foundation of our society, proclamations were issued, news articles were written, television and public service announcements were presented, and "Bells Across America" was implemented in as many places as possible.

"Bells Across America" is observed wherever there are bells. NSDAR members request that every government and public building possessing bells in their communities ring out on September 17 (Constitution Day) at 1:00 p.m. local time. This was the exact date and time of the signing of the Constitution. In many towns the ringing of the bells is an enjoyable cooperative celebration with communities presenting special observances to mark the importance of Constitution Week.

Free viewers are required for some of the attached documents.
They can be downloaded by clicking on the icons below.